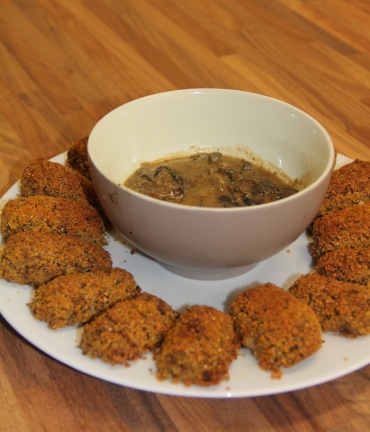 I’m not going to lie, I feel kind of like a fraud for posting this because it’s practically the same as a recipe I got from a cookbook my mom just gave me. And they’re not really completely Italian. But they tasted so good that I just had to share this with everyone. And I’ll do some free advertising for the book it’s called Vegan with a Vengeance, by Isa Chandra Moskowitz, and I highly recommend it. Anyway, I made these for myself today and I had to pinch myself to make sure I wasn’t dreaming. The croquettes are incredible, but the sauce – oh, the sauce! I don’t think anything I could ever write would do these justice, so please, just try them!

For the bread crumb coating:

Preheat the oven to 180°C/350°F. Cook the black eyed peas in some water for about 10 minutes, then drain and rinse them. Put them in a bowl and mash them with a potato masher until completely mashed. Add the olive oil and soy sauce and stir. Next add the quinoa and spices (make sure you cook the quinoa and let it cool for a while beforehand) and stir everything again.

In a small bowl mix together all of the ingredients for the breadcrumbs and set aside. Grease a baking tray with some olive oil. Now, make the mixture of peas and quinoa into little cylinders by rolling them with your hands, but be careful to squeeze them with your fingers into shape to make sure they’re nice and compact. Cover them in the breadcrumbs and place on the baking tray. Drizzle with some olive oil and stick them in the oven for 40 minutes. The recipe says to turn them over after 20 minutes, but I didn’t and they turned out great – it really depends on your oven and baking tray.

For the mushroom sauce:

While the croquettes are in the oven, sauté the onion and garlic in olive oil for a couple of minutes. Then add the mushrooms, thyme, salt, and pepper and cook for about 10 minutes. Add the soy sauce and the vegetable stock, and bring to a boil. Leave boiling for about 5 minutes, then turn it down and let it simmer for another 15 minutes, or until most of the water has evaporated and it’s looking more like a sauce and less like a soup. Add the nutritional yeast and the rice milk, leave to simmer for about 5 more minutes, and then voilá! Pour into a bowl and allow to cool until the croquettes are ready. When the croquettes are ready (after about 40 minutes in the oven), take them out and put them on a plate. Serve right away accompanied by the mushroom sauce.

2 thoughts on “Croquettes with Mushroom Sauce”