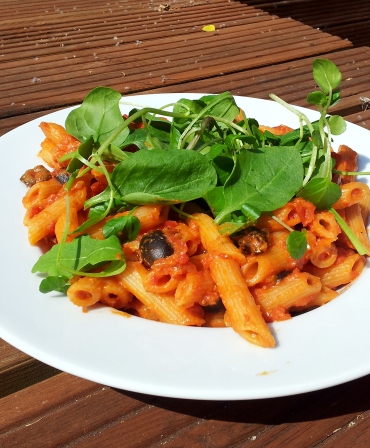 Once again, I’d like to apologize for not posting very often; I promise I’m doing my best to get back on track. But anyway, let’s get to the point: I finally found a decent vegan substitute for cream cheese (that is, one I don’t have to order online from strange websites or trek across half of London to find). I’m sure everybody has already heard of it, but this tofutti cream cheese is really delicious. Anyway, I decided to make a pasta with it to see what would happen, and it was a great success. This pasta is kind of a mix of lot’s of different things I always make, and it turned out great; nice and filling but also nutritious and healthy.

Slice the onions into thin semi-circles and put them in a pan on medium heat, drizzled with olive oil. Add the garlic, peeled and cut in half widthwise. Let it all sauté for 5-7 minutes until the onions start turning golden brown, then add the peeled plum tomatoes. Let that cook on maximum heat for about 5 minutes, then add salt and pepper, turn it down low (but not minimum) and leave to simmer. Now take all of the olives and remove the pits, in any way you like, and set the pitted olives aside. Fill a pot with water and put it on maximum heat, then, when the water is boiling, add a generous amount of salt and the pasta. Stir every 2 minutes, and after about 8 minutes it should be ready; taste it just to make sure. In the meantime, after the pasta has been cooking for about 5 minutes, add the cream cheese to the sauce, and stir it in until it’s nicely melted and distributed. After the pasta has been cooking for 10 minutes you should definitely take it off – there’s nothing worse than overcooked pasta. Drain the water out of the pasta, toss the pasta back into the pot, and add the sauce and the olives. Once that’s all stirred, add the nutritional yeast and stir again. Once that’s ready, serve it and top with the salad. Enjoy!