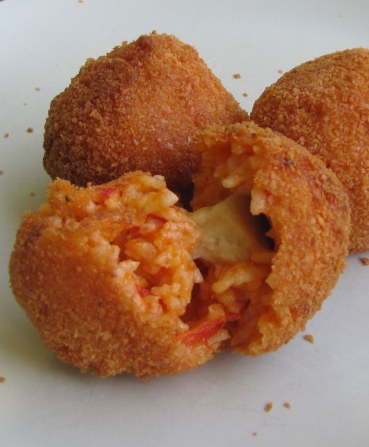 It was like love at first taste: as soon as I tried that first supplí over ten years ago, I was in love. My dad used to joke that he would perform random tests at random times throughout the day, asking himself if he would feel like a supplí at that random time. The answer was never no, and I don’t think I could ever – or would ever – bring myself to refuse a supplí either. These are more Roman than Italian, go North and they don’t know what they are, go South and they change them to arancini – which are more of a distant and significantly inferior cousin of the supplí. If you enjoy these anywhere near as much as I do, than you are guaranteed to love them. Oh and by the way, here are a few beautiful pictures of supplí.

For the risotto: place a pan on high heat, add some olive oil and the onion, chopped into tiny pieces. After about 4 minutes, add the pelati. Stir around for about 10 minutes, breaking up the whole tomatoes until it is a thick sauce. Leave to simmer. Put a pot on medium high heat, add a drizzle of olive oil. Add the rice, mix it around for a bit, and after about 2 minutes, add the wine. Stir rapidly until it has all evaporated. Now add the tomato sauce to the pot. Mix around for a while then add about 100ml of water to the pot. Mix around, and when it has all evaporated, add another 100ml. Repeat until the rice is cooked properly, probably after you’ve poured about 500ml of water (but taste it to make sure). When it’s ready, take it off the heat and leave it to cool for at least 45 minutes.

For the supplí: take a small handful of the finished and now cold risotto, roll it into a ball shape, add a cheese cube into the middle, and then re-roll it properly, nice and compact. Press it to make sure the ball shape sticks. Then place on a tray somewhere, and repeat until you’ve finished all of the rice. Wash your hands, then take a small tray and pour a substantial amount of bread crumbs on it. Take every individual rice ball, and roll it around in the bread crumbs until it is fully coated. Once all of the rice balls are covered in bread crumbs, heat vegetable oil in a large pan. When it is close to boiling, add as many rice balls as can fit in the pan at once. Cook until golden brown, and flip them over if part of them was sticking out of the oil. Then take them out of the pan, and leave to try on a plate covered with a paper napkin to absorb the oil. Repeat this for all of the rice balls, and you have some supplí! 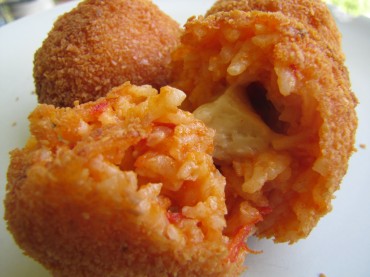 This is by far my favorite food, so if you have any questions about how to make them, please don’t hesitate to ask! Also, I would love to hear back from anyone who tries making these. Hope you enjoy them!