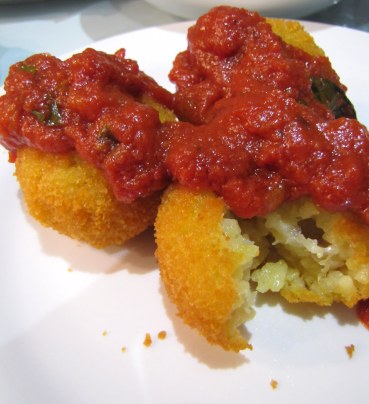 Although these aren’t the classic supplí, they were, surprisingly, the first ones I ever tried. I’ve wanted to make them for a while, but now that I came back from Egypt with tons of saffron I really had no choice. While the normal supplí are more of an antipasto, these are better served as a main course. I think they’re absolutely incredible, and should really impress anybody you’re cooking for.

Melt the margarine together with the olive oil in a large non stick pot on medium heat. Add the onion, and leave to cook until soft and golden brown. Now turn up the heat to maximum and add the risotto. Stir for about 3-4 minutes, then add the wine. Stir vigorously for a minute or so, then stir occasionally until the wine has mostly evaporated. Add the vegetable stock powder, salt, pepper, and about 300ml of the boiling water. Stir while the water evaporates, then repeat with another 200ml of water. Now add the saffron and another 200ml of water, stirring occasionally. When the water has almost evaporated, taste the risotto. If it’s not ready yet, add another 100ml of water, and continue until you taste it and it’s just turning soft. Remove from the heat and add the nutritional yeast and egg substitute, and stir it all together. It should be a bright yellow color; if it’s not, add another tsp of saffron and stir that in. Now set it aside to cool.

Drizzle a generous amount of olive oil onto a pan on medium  heat. Add the onion and garlic, and let them cook until the onion is caramelized. Add the peeled plum tomatoes, and leave to cook for 20 minutes. When the tomatoes begin to disintegrate on their own, go ahead and break them down to get a nice smooth tomato sauce. Leave to simmer for as long as possible now to reduce it substantially and make it more concentrated (at least 10 minutes though). Then add the passata, some salt, pepper, and the basil, and leave to simmer for another 10 minutes. When it’s quite thick (for a tomato sauce) take it off the heat and set aside.

Make a little ball, about 4-5cm across, with the risotto. Push your finger down into the middle to make a little hole, put a piece of cheese inside, and cover it up with risotto. Roll the ball nice and tight, make sure its nice and solid and won’t fall apart, then set aside. Repeat until you’ve done all of the risotto. If you have someone to help you it makes things much faster and easier, as they can be rolling the balls around in breadcrumbs as you make them. If not, do it after you finish. Once you have all of the supplí covered in breadcrumbs, fill a large pan on high heat with vegetable oil, and once the oil is ready for frying, start adding the supplí. If they aren’t completely submerged, turn them over when you see that one side is golden brown. When they’re all completely golden, take them out and put on a plate with a few layers of paper towels. They’re ready to eat immediately, but I suggest giving them 10 minutes (at least) to cool, because they’re delicious and scalding hot – not the best combination! When you’re ready, serve them with the bowl of tomato sauce on the side, and cover each supplí with a generous spoonful of sauce. Enjoy!

One thought on “Supplí allo Zafferano”